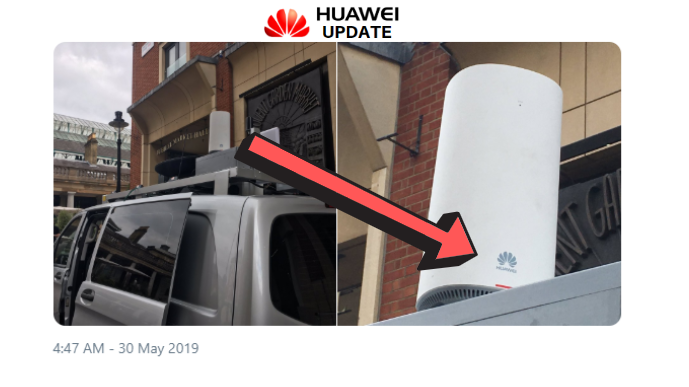 
The outside broadcast van was being used to relay long-serving Beeb man Cellan-Jones on this morning’s BBC News programme.

Weirdly, the Beeb seemed to suffer a fit of embarrassment about its highlighting of the Chinese company’s wares and shortly afterwards deleted its pictures – but not until sharp-eyed Reg commentard m0rt had alerted us to their existence. And without further ado, here’s the proof.

The BBC also took a lighthearted shot at EE for its 10GB data package not being big enough, to which the telco evidently responded that if you’re going to play silly buggers and thrash your data allowance with test broadcasts at full 4K HD TV bitrates, of course you’ll need to top up before going on air.

EE, one of the UK’s cellular providers, officially launched its 5G network in six cities across the country including Belfast, Birmingham, Cardiff, Edinburgh, London, and Manchester. To help illustrate one of 5G’s biggest advantages, BBC reporter Rory Cellan-Jones did a live report during its BBC Breakfast program that was streamed over EE’s 5G network.

Huawei declined to celebrate the occasion publicly which is understandable given that EE, whose network went live today, hastily dropped Huawei’s flagship Mate 20 handset from its list of 5G launch devices after the US ban.