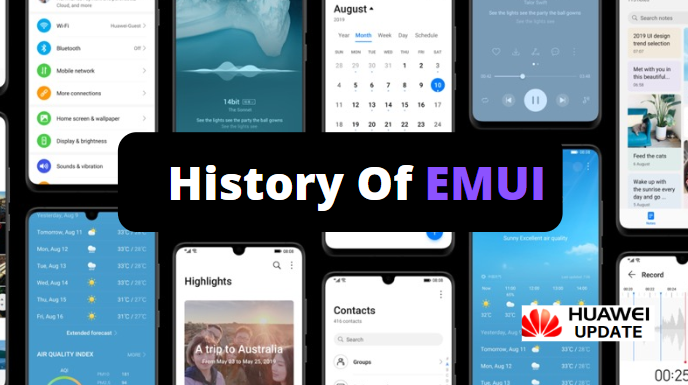 
Huawei EMUI, the history of EMUI was first started on 30 December 2012 also known as an Emotion UI, EMUI is a custom mobile operating system which is based on Android that is used on most Huawei and Honor branded smartphone devices (List of Smartphones). The EMUI 1st version is Emotion UI 1.0/EMUI 1.0, based on Android 4.0 features a voice assistant app (only in Chinese), customizable home screens and theme-switching. At the official launch, the company stated that this EMUI system is the world’s most powerful and easy to use by the user’s point of view.

EMUI 3.0: This version is officially launched on 4 September 2014 with Ascend Mate 7 in the pre-IFA event in Berlin. The user interface was ever since called “EMUI” instead of “Emotion UI”. It features a new app store (for China markets).

EMUI 5.0:  In 2016, EMUI 5.0 was introduced, with the Huawei Mate 9. Based on Android Nougat, EMUI 5 brings a lot of the native Android features relatively untouched, with multi-window, quick app switching & more.

EMUI 8.0: Huawei released EMUI 8 along with the Huawei Mate 10 in late 2017, Company skipped EMUI 6.0 and 7.0 to align with the versioning of the Android 8 OS that EMUI 8 is based on. Also in the same year all ROM images were removed on the official website. Huawei says it will provide a “more convenient and satisfactory update service” and the over-the-air (OTA) updates schedule has started.

EMUI 10: EMUI 10, based on Android 10, was launched on 9 August 2019 at the Huawei Developer Conference 2019. The first beta version of EMUI 10 was released on 8 September 2019, first coming to Huawei’s P30 and P30 Pro flagship smartphones. Sign-ups for the EMUI 10 beta program for P30 and P30 Pro smartphones started on 10 September 2019. New features in the EMUI 10 brings lots of improvements to include a system-wide dark mode, redesigned camera app.