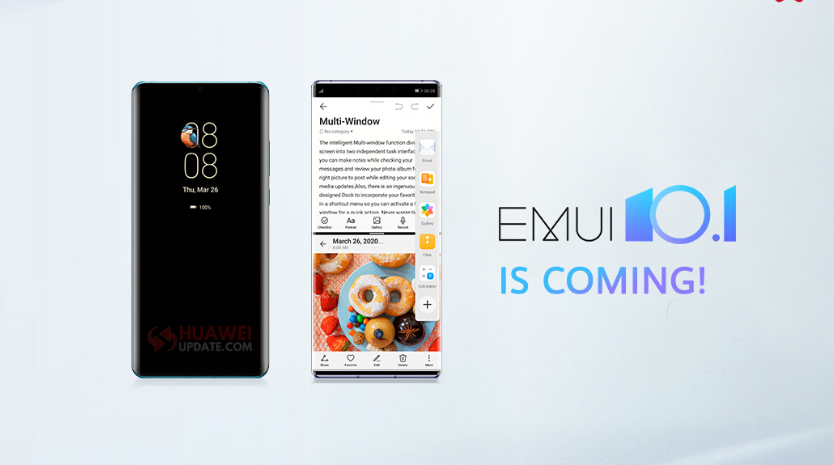 
Huawei today officially announced the global release schedule of EMUI 10.1. The latest Emotion UI was first introduced during the launch of the Huawei P40 series in March this year, EMUI 10.1 brings a bunch of new features such as MeeTime, Screen Sharing, Multi-Screen Collaboration, and more. Starting later this June 2020, the following devices will be upgraded to EMUI 10.1/Magic UI 3.1. Check the list below.

EMUI 10.1 is designed based on the principle introduced in EMUI10 – Beyond Beauty. New additions and improvements made in this version optimise user experience to further the benefits of the distributed ecosystem.

With EMUI10, Huawei launched Always on Display (AOD) with vibrant colours that reflected the changing hues of the sky. Now EMUI 10.1 presents 3D Rendered Always-on Display that separates digital figures from the background in a multi-layer construct, offering a captivating three-dimensional experience to the user. This feature will be rolled out to more devices in this update. (*The availability of this feature may vary according to models)

Users will also see three fingerprint unlock animations on EMUI 10.1. Inspired by the elements of earth, fire and water, these animation effects look immersive and riveting.

HUAWEI MeeTime is built on the distributed ecosystem, allowing it to connect with third-party devices such as the DRIFT action camera in such a way that the external camera becomes an extended camera of the smartphone itself. Users will find great benefit in this cross-device connectivity when they wish to share a live sport or stream a live concert during the call. HUAWEI MeeTime is initially launched in China, Malaysia, Thailand, Philippines, Singapore, Indonesia, Saudi Arabia, and South Africa will be rolled out in more countries later this year.

Just hold down the power button for one second or say ‘’Hey Celia.” Celia will support three languages – English, French, and Spanish and will be rolled out to Huawei Mate 30 and Huawei Mate 30 Pro on United Kingdom, France, Spain, Mexico, Chile, Columbia, and South Africa and eventually to more countries in the world.

Huawei EMUI 10.1 brings more unique and useful features, to experience the latest version download it via the following method below.

How to update the latest EMUI 10.1 version?

EMUI 10.1, users may check for eligibility by going to Settings > System & Updates > Software Update on their devices, or go to Support (HiCare) App > Quick Services > More > Update to get the update in advance.