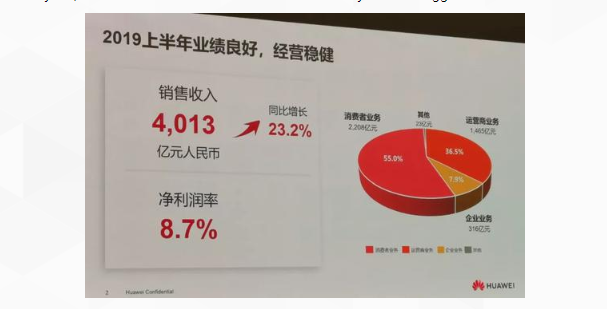 Company Chairman Liang Hua acknowledged that US ban might impact its short-term growth but noted that “revenue grew fast up through May” because of the momentum it achieved up to that point, according to Reuters.

Huawei founder Ren Zhengfei last month said its troubles with the US could ultimately wipe $30 billion off 2019 revenue expectations. However, he also told Yahoo Finance last week hat the company plans to ship 270 million phones this year, a significant increase over the 206 million phones it shipped in 2018.

The US blacklisted Huawei in May by adding it to the “entity list” of groups deemed to be acting against national security interests. It came after President Donald Trump’s executive order essentially banned the company based on long-term concerns that it maintained close ties with the Chinese government — which the company has consistently denied.

On the other hand, Huawei’s chairman Liang Hua also said that even after the US government’s ban on Huawei, Huawei did not stop production one day, and did not interrupt the delivery of customers one day. He said that in addition to the impact of smart computing business, other businesses are growing.

Especially in the 5G field that has received much attention, Liang Hua said that because Huawei is well prepared, the 5G business has not been affected by the US ban, and even after the US entity list was issued on May 16, it still obtained 11 commercial network contracts. At present, Huawei has obtained 50 commercial contracts in more than 30 countries and 5G ships more than 150,000 base stations.