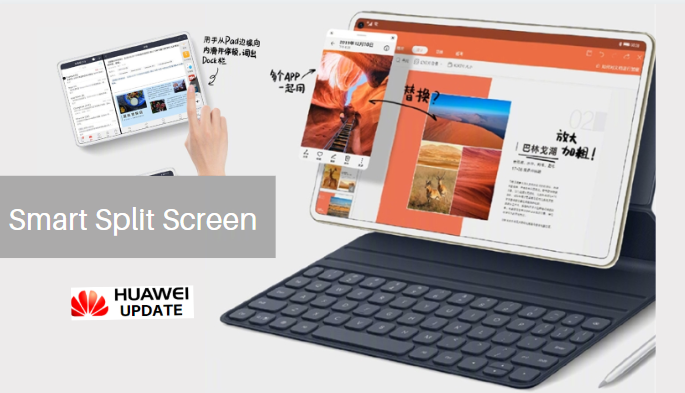 
Huawei introduced the new MatePad Pro in November this year. One of the best feature company brings support for smart split-screen.

According to the official introduction, MatePad Pro can complete quick operations. When replying to an email, open the folder and drag the file directly to the attachment in the same interface.

And it can make travel notes, where the illustrations are needed, call out the gallery floating window, you can directly drag the picture in, and support adjusting the size, position, and color of the transformed picture. If you want to tweet, get this tweet done in Word while viewing the information in the floating window. When watching dramas online, drag out the WeChat small window to reply directly to the message.

The 7nm Kirin 990 chipset fuels the MatePad Pro along with up to 8 GB of RAM (new variant) and 512 GB of storage. There is a nanoSD card slot onboard for expanding its storage tablet is equipped with a huge 7,250mAh battery that supports 40W rapid charging. However, the device ships with a 20W fast charger. The MatePad Pro has a 13-megapixel main camera with f/1.8 aperture. It comes with features like phase detection autofocus and LED flash. On the front is an 8-megapixel camera with f/20 aperture. The device comes with support for M-Pencil stylus that 4096-level pressure sensitivity nib.

Huawei MatePad Pro pen uses a magnetic suction + wireless charging design, which allows the pen body to be firmly attached to the tablet. Charging the stylus takes only 30 seconds, and Bluetooth pairing can be used for 10 minutes.