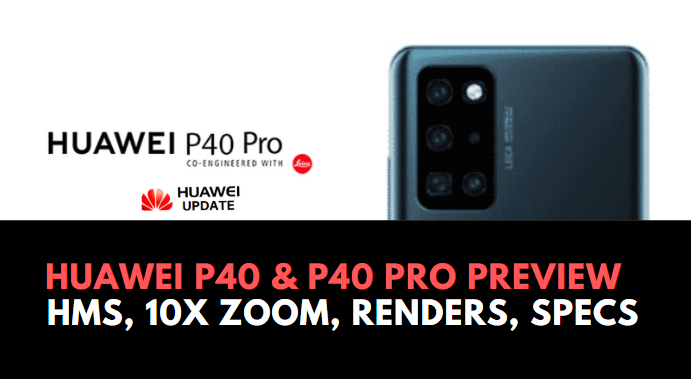 
Richard Yu, CEO of Huawei Technologies Consumer Group, said the company’s next flagship smartphone, the P40, and P40 Pro, will be launched at the end of March 2020(Paris). The Huawei CEO also confirmed that the phone will be built on Android 10 with Huawei’s customised user interface, Emotion UI, EMUI.

The reports about adding Huawei’s own Operating System HarmonyOS in the P40 series is not true, because In an Interview Richard Yu says, HarmonyOS, will not be powering smartphones or tablets in 2020. Instead, it will be used on other connected devices, including smart TVs and wearables.

Huawei P40 HMS: Talking about the Huawei HMS (Huawei Mobile Services), the report of Economic Times includes, Charles Peng, the CEO of the Huawei and Honor brands in India in Huawei’s Consumer Business Group, as saying that P40 will come equipped with Huawei Mobile Services (HMS), in place of Google Mobile Services (GMS). Huawei offers developers up to $17,000 for making their apps available for HMS, supported by Huawei’s $1 billion global fund the company announced earlier this year.

“We have our own HMS and are trying to build a mobile ecosystem. Most of the key apps such as navigation, payments, gaming and messaging will be ready soon.” Peng told The Economic Times. The exact launch date of HMS is revealed by Frandroid, a French media.

Huawei P40 Specs: The display is said to be 6.5-inches in size with a QHD+ resolution, a 120Hz refresh rate, and a screen-to-body ratio of 98% and it will arrive with a curved display. The Huawei P40 Pro has a USB Type-C port at the bottom by the SIM tray and speaker griller and also has no audio jack. The P40 Pro may arrive with five cameras at the back. The five snappers on its back would feature a 64-megapixel Sony IMX686 main sensor joined by a 20-megapixel ultra-wide, a 12-megapixel periscope telephoto (10x optical zoom), a macro camera, and a 3D ToF unit. The latest Kirin 990 5G (As the World’s 1st Flagship 5G SoC powered by 7nm+ EUV1, the Kirin 990 5G achieved significant performance with lower power consumption. It supports SA and NSA network architectures, peak download speed and wide frequencies of FDD and TDD. The brand new architecture of Big-Core plus Tiny-Core NPU vastly improves AI capability for your intelligent life.) chipset will be included in the devices.