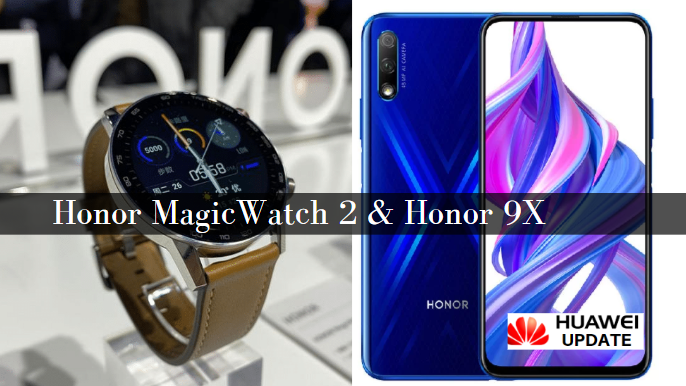 
The company recently confirmed that the Honor MagicWatch 2 and Honor 9X India launch is in January 2020, at an event in Shenzhen, China. Honor will also launch the Honor 9X. Honor 9X was launched in China back in July, while the Magic Watch 2 made its debut last month.

The Honor Watch Magic 2 is powered by HiSilicon Kirin A1 SoC. When connected with a compatible smartphone, users can also make or receive phone calls via Bluetooth headphones or by using the built-in speaker and microphone. The smartwatch also has preloaded apps including Weather, Alarm, Timer, and Find My Phone. Moreover, there is 4GB of onboard storage that can be used to store up to 500 songs.

The Honor 9x specifications includes a 6.59-inch display with a resolution of 1080×2340 pixels at a pixel density of 391 pixels per inch (PPI). The phone is powered by an octa-core Kirin 810 processor. It comes with 4GB of RAM. The Honor 9X runs Android Pie and is powered by a 4,000mAh battery. As far as the cameras are concerned, the Honor 9X on the rear packs a 48-megapixel primary camera with an f/1.8 aperture and a second 2-megapixel camera with an f/2.4 aperture. It sports a 16-megapixel camera on the front for selfies, with an f/2.2 aperture.

The Honor 9X runs EMUI 9.1 based on Android Pie and packs 64GB of inbuilt storage that can be expanded via microSD card (up to 512GB). The Honor 9X is a dual-SIM smartphone that accepts Nano-SIM and Nano-SIM cards.