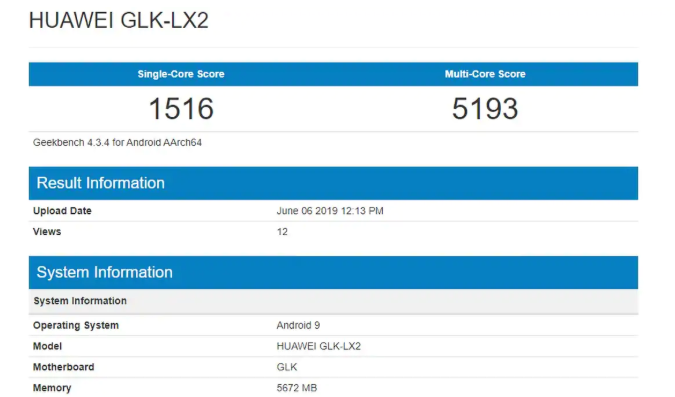 
The Huawei Nova 5i’s 6GB RAM variant, carrying the model number ‘HUAWEI GLK-LX2′ has been spotted on Geekbench, courtesy of two separate listings under the same model number. The phone scored 1516 and 1530 in the Geekbench single-core test, and put up a tally of 5193 and 5233 on the multi-core test in each run. As per the Geekbench database, the phone packs an octa-core SoC clocked at 1.71GHz, paired with 6GB of RAM.

Another variant of the Huawei Nova 5i carrying the model number ‘HUAWEI GLK-LX3′ was recently spotted packing the same octa-core processor clocked at 1.71GHz, paired with 4GB of RAM.

The new Geekbench listing of the phone indicates that the HUAWEI GLK-LX2 will be the higher-end variant of the Huawei Nova 5i sporting 6GB of RAM, while the HUAWEI GLK-LX3 might be the base model that comes equipped with 4GB of RAM.

Huawei’s Nova series phones have usually made their international debut under the ‘P Lite’ moniker, and as per rumours, the Nova 5i will be launched in markets outside China as the Huawei P20 Lite. The Huawei Nova 5i is tipped to pack quad rear cameras and a 5.84-inch full-HD+ hole-punch display.