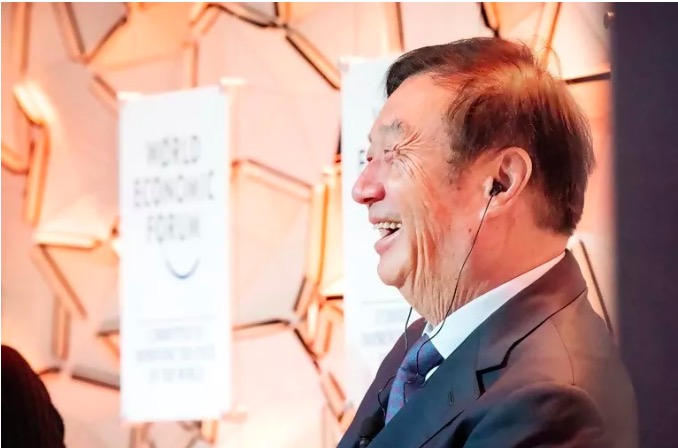 
At the 2020 Winter Davos Annual Meeting, that was held in Davos, Switzerland from January 21-24. Huawei founder and CEO Ren Zhengfei shared his view regarding the U.S. topic.

Ren said that Huawei was originally a very pro-American company. Huawei was successful today because most of its management was learned from the United States.

He said that since its establishment, Huawei has hired dozens of American consulting companies to teach Huawei how to manage.

He said that in the entire process of these companies have taught Huawei how to manage and now Huawei’s entire system is very similar to American companies.

The United States should be proud that its output has brought development to Huawei, he said.

The following is the full text of Ren Zhengfei’s speech, Translated Text Below,

When trains and ships appeared, including textile machinery, people also had some small panics, but for the development of the later industrial society, these panics were eliminated.

In this process of continuous development, we have now entered the information society.

What time is this? It is electronic technology that has been highly breakthrough.

Although Moore’s Theorem will also constrain the advancement of electronic technology, today the ability of chips to be refined to 2 microns and 3 microns is no longer a question mark.

Due to the tremendous increase in computer capabilities, information technology has spread throughout the world.

The explosion is a panic for people. Is it good or bad? I think it is good.

I think human beings will always use it to benefit this society in front of new technology, instead of using it to destroy this society, because the vast majority of people in the whole society yearn for the future to be a happy life and not yearn for evil.

However, if we lengthen the lens, atomic power generation and atomic energy are serving the society, including the use of radioactivity in medicine and in various aspects, which have benefited mankind.

Of course, our research is mainly on weak artificial intelligence. It has boundaries, certain conditions, and certain data support.

For example, the driving of cars, mining of mines, pharmaceutical technology, and a series of these things still have boundaries.

After this boundary was improved with the help of artificial intelligence, it increased wealth creation.

Everyone said that in the process of creating wealth, many people lost their jobs. This is a social problem. But wealth is always better than nothing.

Today, no matter the poor in our society, the absolute wealth is greater than in the past few decades, but the widening of the gap between the rich and the poor does not mean that the poor are moving towards greater absolute poverty. This is a social issue, not a technical one.

In fact, China’s current education still follows the education method of the industrial society, mainly focusing on the training of engineers, so artificial intelligence cannot develop rapidly in China.

So I think the United States has too much anxiety.

The United States has long been accustomed to being the boss of the world. Everything should be the best it can be. Someone else has done a good job and may not be comfortable in his heart.

It is uncomfortable and does not represent the trend of the world. I think that all human beings must study artificial intelligence well in the end and study how this thing benefits humanity.

Mr. Harari said just now that we need to formulate some norms. What is allowed to be studied and what is not allowed to be used to control its development direction.

I personally think that within 20 or 30 years or longer, the problem that Mr. Harari thinks about is that electronic technology has invaded human beings and merged into a new form with human beings. I think that it will still be possible within 20 to 30 years. Will not appear.

The earliest emergence is the process of production, the efficiency of production, and the creation of more wealth. As long as there is more wealth, the government has something to distribute and it can balance social contradictions.

When I published the article in The Economist, I also thought about what would come from the combination of electronics, chips, and genes.

But the editor of The Economist deleted it for me, because it also provoked a topic. I agree to delete it because I know I have a problem.

Originally, Huawei was a very pro-American company. Huawei was so successful today that most of its management learned from the United States.

Because we have hired dozens of U.S. consultants to teach us how to manage. In the whole process of teaching us management, in fact, our entire system is very similar to the United States. The United States should be proud. After its exports, it has brought us a development.

Therefore, from this point, I don’t think the United States need to worry too much about Huawei’s position and growth in the world. The list of US entities that hit us last year didn’t help much, because we thought we could basically resist it, and we had made some preparations.

This year the United States will upgrade technology to hit us again, but we don’t think we will be greatly affected.

Because we were a very poor company more than ten years ago, I did n’t live in a house 20 years ago. I lived in a house of more than 30 square meters.

Where did the money go? All are invested in the company’s research and development.

If we felt secure at that time, I didn’t need to make a backup. He said that because we didn’t feel secure, we made backups and spent hundreds of billions of spare tires. Therefore, we can deal with the first blow.

We have the experience of hitting us in the first round last year, so in response to this year’s technical blow, we are more confident and will not have this problem.

But will the world be split into two worlds as a result? I don’t think so. Because science is truth, there is only one truth. Any scientist who discovers this truth broadcasts it to the whole world.

The underlying logic of science and technology is uniform throughout the world, but technological inventions themselves can be diversified.

You see, there are many types of cars competing in cars. This kind of competition is conducive to social progress. It does not require the society to implement only one technical standard.

But will the world be divided? Because the underlying logic of science and technology is unified, it will not split.

As a contract society, we should understand a contract more deeply, such as a mine.

Can a mining be done entirely by artificial intelligence, nobody? Yes, we have achieved mining within a few thousand kilometers.

If this mine is in a frozen area or at a high altitude, this value must exist.

In the future, if some leading mines, such as those in Brazil, implement this mining method, will it be possible? Yes.

Therefore, the depth of understanding of human beings is a step by step understanding. As for the future invasion of electrons into human beings, people will become gods. Don’t worry about this, because by the age of 80, this person will die. The soul cannot inherit, and he cannot Become a “God.”

Just like we are now, in fact, sometimes we read the textbooks of elementary school students, we don’t understand much.

I remember a lot of things we learned in college and we have already finished in middle school, so we feel that human beings have actually improved in this information society. The results of different people’s grasp of knowledge are different, and the way to solve problems is different. The human subjective initiative should exist, unlike viruses.