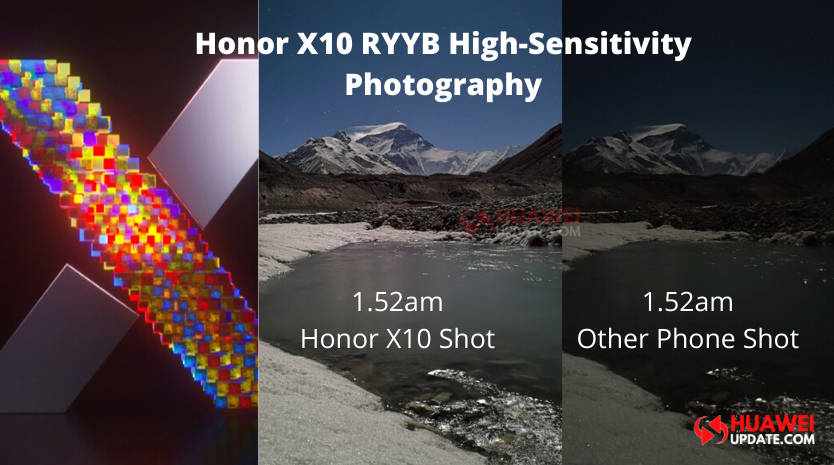 Under the extreme height of 5,200 meters, minus 20 degrees Celsius, 1:52 am, temperature and dark light in the poster, with RYYB high-sensitivity CMOS, it finally showed a day-like picture, the snow-covered water in front of you, and the snowy mountains in the distance, the sky is clearly visible. The other two photos from other devices have been unable to identify the details.

The RYYB sensor was developed exclusively by Huawei Honor and has been used in flagship devices such as Huawei P, Mate, and Honor V series.

Unlike the RGGB Bayer array used in general sensor filters, it replaces the original green filter with yellow, which is equivalent to both red and green light sources. With the additional red light source, the amount of incoming light is increased by nearly 40 %, More convenient for shooting in extreme low light conditions.

It is reported that the main camera CMOS of the Honor X10 series is IMX600y (the same model of Mate30, 40 MP  RYYB). Among them, the high-end version of the Honor X10 PRO also provides 8 million ultra-wide-angle lenses (120 ° field of view), 8 million telephoto lenses (supports 5x optical zoom), and supports OIS anti-shake.