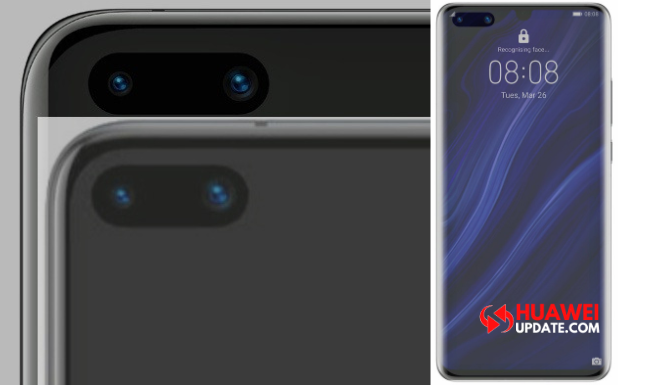 
Huawei will release the new P40 series smartphones in Paris, France on March 26. Richard Yu, the CEO of Huawei Technologies Consumer Business Group, at Huawei Virtual launch conference revealed that the Huawei P40 series will be the world’s most powerful 5G flagships.

Huawei P40 and P40 Pro leaks/rumors we getting on a regular basis, and now we have seen most of the details of upcoming flagships. Today, well-known leaker @RODENT950 shared another Huawei P40 and P40 Pro front camera view, both smartphones has cylindrical pills. The only difference we can see is the size of the camera shape.

He also shared high resolution render of the Huawei P40 Pro, it shows the comparison between Huawei P40 Pro & Huawei P30 Pro, According to the image below, Huawei is not going to increase the size of the P40 series, the Pro models are the same size as the P30 Pro.

According to previous leaks, the Huawei P40 Pro will be equipped with a Kirin 990 chip, a front 32-megapixel dual camera, and a rear-matrix Leica five-camera module, 10x optical zoom, including a 52-megapixel Sony IMX 700, supports up to 16-in-1 pixel technology, 1/1.33-inch sensor, an ultra-wide-angle lens, a macro lens, and a ToF lens, and will also be integrated with a periscope telephoto.