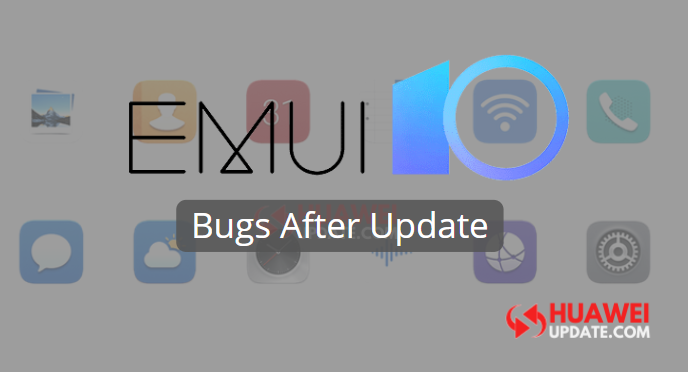 
Huawei/Honor has pushed the latest EMUI 10 update to its selected smartphones/devices according to the official schedule but some users after installing the update version EMUI 10.x.x.x (X= update version number depends on system-wise) facing lot’s of issues, EMUI 10 bugs/EMUI 10 problems/EMUI 10 errors.

The error is generally occurring on the Slide down menu. User’s found the first glitch on the Honor 8X, the PM which should be next to the time is next to the day.

New bugs in EMUI 10 after update:

Honor 8X JSN-L22 User: After Updating I’ve recently updated my Honor 8X to EMUI 10 and I’ve found some annoying bugs. First is the notification panel animation; every time I swipe down quickly, the background changes to blur without the fade effect and it also happens when I close the panel quickly.

Last is the location of “am” and “pm” on the notification panel (As shown in the image above); it is placed next to the date, it should be located next to the time. Although these are minor bugs, it really is ruining the fluidity and smoothness of the UI experience.

After updating to the latest EMUI 10 version, Honor 10 Lite not showing call notification for 0-5min.

User 1: After updating EMUI 10 I Have noticed a bug. If am trying to uninstall any app done perfectly but after uninstalling the top right corner the Uninstall caption showing always. After restarting the device then the icon removes.

User 2: After the android 10 update, In notepad, I found an issue that when I am saving one-note as image file its watermark showing ‘sys default watermark’.

After updating the phone to EMUI 10 my music player widget stopped working. Does anyone else is facing the same issue? Also, all the icons on notification drop-down are large even when the small size is selected for text and display.

EMUI 10 has a hotspot issue.

Experiencing a bug after I updated my phone to 361. Whenever I play games or uses an app. The brightness will suddenly become dimmer (already disabled auto-brightness) and my phone will become really laggy at the same time. The battery will also drain even tho I’m charging when using any app or games. But it charges properly when in the home screen. Already tried formatting the phone, clearing cache partition, and even rollback using hisuite.

Solution: We suggest, wait for another rollout because the company is working on the adaptation and optimization for the next EMUI 10 update. Once we receive the new version or update, we will let you know in the same article.

Meanwhile, If you also facing the same issue related to the above topics, send us a screenshot on firmware@huaweiupdate.com (Don’t forget to mention Device name and Version number thanks.)