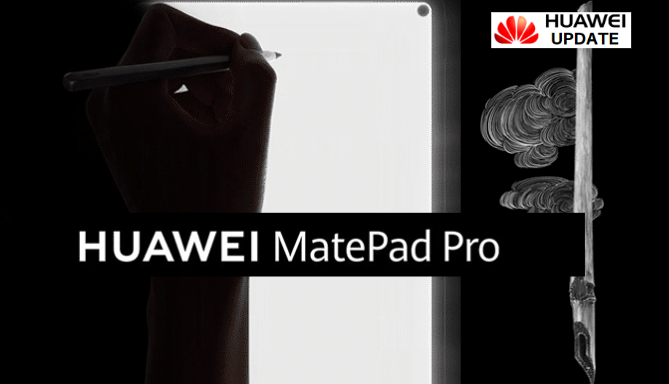 
The Huawei MatePad Pro Launched in China. The Specifications of MatePad Pro are it measures 159 x 246 x 7.2mm and it weighs 460 grams. The tablet is equipped with a 10.8-inch display with rounded corners. The IPS LCD display that features a punch-hole for the front camera supports quad HD+ resolution of 2560 x 1600 pixels and DCI-P3 color gamut. With 4.9mm slim bezels around the display, the MatePad Pro promises a screen-to-body ratio of 90 percent.

The optional magnetic keyboard case and M-Pencil stylus are respectively priced at 499 Yuan and 699 Yuan.

Huawei will release a new tablet MatePad Pro, claiming to “reconstruct creativity”, this is Huawei’s first tablet named Mate on November 25th 2019. Recently Huawei has shared a new teaser video that showcases the Huawei MatePad Pro teasing some of the key features of the upcoming flagship tablet.

The MatePad Pro will adopt a digging screen and a narrow border design around the screen. The screen ratio is expected to exceed 90%, and support the multi-screen collaborative operation.

Huawei M series tablet, Mate 20 X/Mate 30 and other mobile phones have previously supported M-Pen stylus, 4096-level pressure, and this preview seems to be different from the previous model, obviously the function will be greatly upgraded. , matching the top position of MatePad Pro.

From the current signs, the MatePad Pro screen is expected to be 10-12 inches, and is expected to be equipped with the Kirin 990 flagship processor, up to 6/8GB of memory, 512GB of storage, and a magnetic keyboard.

Also, the Geekbench listing of the MatePad Pro with the MRX-AL09 model number managed 3,808 points in the single-core test and 11,832 in the multi-core part. As expected it’s packing an eight-core Kirin chipset with a base clock speed of 1.84 GHz, which matches the Kirin 990 chipset. The listing also shows 6GB RAM onboard alongside Android 10.