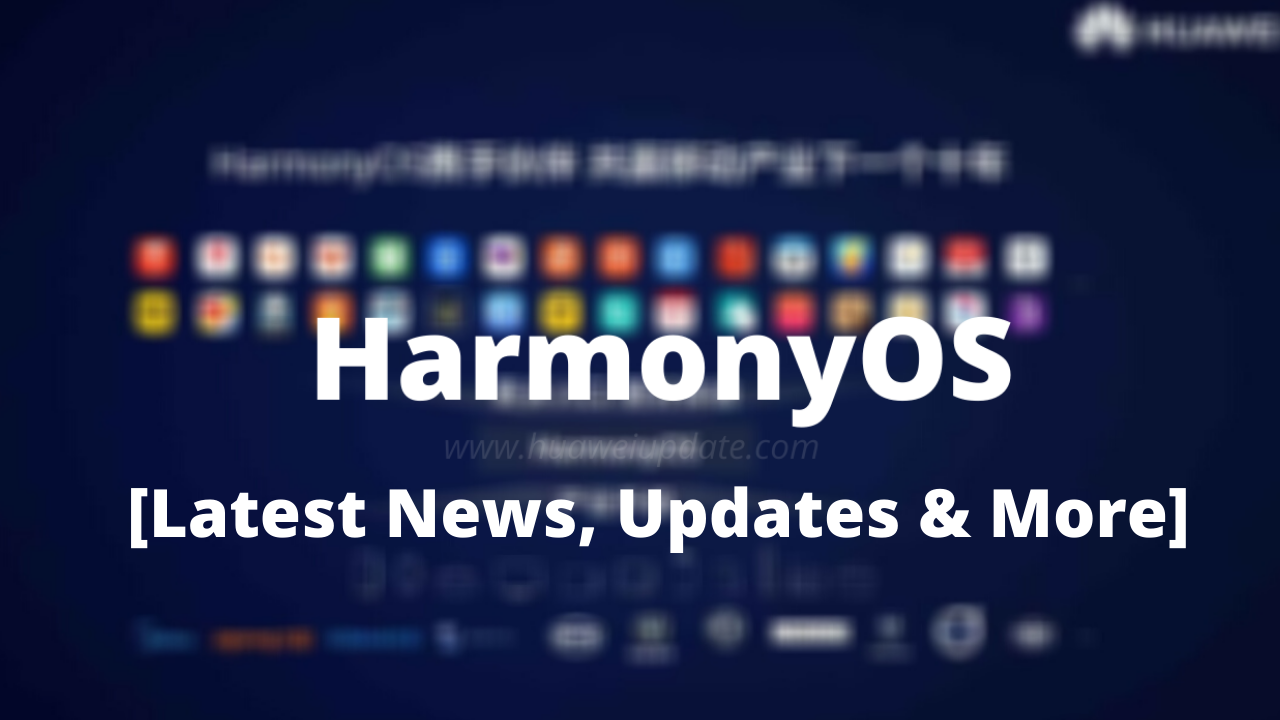 During the launch event of the HarmonyOS 2.0 mobile developer beta, the company said that it will expand the beta program to more devices in 2021.

On June 2, 2021: Huawei officially launched the Harmony OS, its in-house operating system, a replacement for Android. The company announced a new watch – Watch 3 Series, a new tablet – MatePad Pro 10.8 & 12.6, and a new phone powered by HarmonyOS. The company has also shared a list of 100 different Huawei phone models to upgrade with Harmony OS over the next year.

Huawei has two different operating systems that it calls “HarmonyOS.” First is the IoT and smartwatch version of HarmonyOS, which is based on Huawei’s LiteOS and is open source. The second version of Harmony OS is for phones and tablets and is a fork of Android and uses the Linux kernel.

HarmonyOS also has a feature called “Super Device,” when all the devices in your house run Harmony OS, Huawei says you’ll be able to use some pedestrian-sounding networking features like pairing a drone to a smartphone for remote control, using a tablet stylus on your PC, or connecting wireless earbuds to your phone.

The first batch of phones includes Huawei flagship devices like the Mate 40 and 30 series, the P40 series, and the foldable Mate X2. More batches of phones are coming in Q3, Q4, and 2021 H1.

June 12, 2021: Users who join the public beta can receive the HarmonyOS upgrade medal at the Huawei forum club.

June 12, 2021: Huawei has released a small patch update for those users who already received HarmonyOS 2.0.0.116 update.

June 11, 2021:  According to the latest report of the CITIC Securities Research, the degree of intelligence of automobiles is constantly escalating, and automobiles are gradually transforming from traditional transportation tools to multi-functional intelligent mobile spaces, and the requirements for the underlying operating system are getting higher and higher.

June 10, 2021: Wang Jun, President of Huawei Smart Car Solutions BU, said that before 2025, the connotation of a car is still a car, but now the car does have a lot of extensions. The first extension is whether it can become a mobile smart space.

June 9, 2021: After upgrading HarmonyOS 2, the game data will not be lost and the Android application can be used normally.

June 9, 2021: After an official debut, in a week the HarmonyOS 2.0 has exceeded over 10 million installations on Huawei devices.

June 5, 2021: Huawei HarmonyOS 2 has been officially released, but most of the applications with HarmonyOS services come with the system.

June 5, 2021: Huawei launched the Mate 40 Pro, Mate 40E, Mate X2, and Nova 8 Pro with 4G network connectivity and brings HarmonyOS operating system inside. Apart from the HarmonyOS all the specifications remain the same as the 5G versions.

June 4, 2021: Huawei has officially released the “Notice on Standardizing HarmonyOS Communication Caliber” issued by Xu Zhijun. The notice explained that the lack of standardized expression and unified caliber of the “Harmony Operating System” led to inconsistent internal understanding and inconsistent external statements, which could easily cause confusion.

June 2, 2021: Wang Chenglu, president of Huawei’s consumer business software department, said at the Huawei HarmonyOS 2 and Huawei’s full-scene new product launch conference that, apart from HarmonyOS 2, no other system can achieve only one system regardless of the size of the device.

June 2, 2021: Huawei has officially stated that HarmonyOS provides more than 16,000 APIs, which meet the development needs of most applications.

May 29, 2021: These Huawei smartwatches will receive HarmonyOS update.

May 27, 2021: Huawei shared a logo of this upcoming operating system, the HarmonyOS will also be called “HM OS”.

May 24, 2021: Confirmed: HarmonyOS for smartphones officially launching on June 2.

May 24, 2021: Hongmeng is about to open source the system and will launch HarmonyOS courses in 15 schools including Wuhan University.

May 22, 2021: HarmonyOS open-source code is currently about 8GB. On the other hand, the Android open source has exceeded 60GB, which is very big now. Furthermore, it’s also best for devices that only have 32GB of internal memory.

May 19, 2021: Huawei will announce the official news of the HarmonyOS at the June 2 press conference, and the Huawei Harmony (Hongmeng) system has multiple platforms besides its own HiSilicon Kirin. The future is not limited to Qualcomm.

May 18, 2021: HarmonyOS 2.0 operating system will be released on June 2, 2021. At that time, many smartphones will be able to upgrade over HarmonyOS, and currently, the platform has been joined by more than 200 mainstream mobile apps.

May 18, 2021: This year, according to the established plan, a full-stack system of 128MB-4GB devices will be open-sourced. “Third-party mobile phone manufacturers are welcome to use the Hongmeng (Harmony) system, open-source and build together.”

May 18, 2021: Huawei at HarmonyOS Partner Summit announced that the HarmonyOS hardware ecosystem has been rebranded as HarmonyOS Connect. Huawei has been working with partners to improve the HarmonyOS ecosystem since April last year, and this effort has been going on for a year.

May 16, 2021: Huawei’s in-house system should exceed “16% market share” as quickly as possible. Specifically, the company’s goal is to exceed this mark by the end of this year.

May 12, 2021: According to the latest information, Huawei had applied for the registration of the “Hongmeng” trademark in 2019, and the international classification was classified into 42 design studies. In 2020, the trademark process status was changed to rejected.

May 11, 2021: Huawei will hold the “HarmonyOS connect Partner Summit” in Shanghai on May 18 to discuss with partners various scenarios such as commercial value and future trends brought by the new ecosystem of the Harmony system.

May 10, 2021: Huawei’s HarmonyOS 2.0 developer beta testing is now rolling out for the Honor 30 Pro smartphone.

May 10, 2021: HarmonyOS 2.0 mobile ecosystem weighs lighter than Android-based EMUI 11 while keeping the memory usage at the lowest and it is surely a piece of good news for low-memory Huawei smartphone users.

May 09, 2021: It seems that Huawei will start Harmony OS 2.0 the third-largest mobile phone operating system outside of Android and iOS, on a large scale as early as June 2021.

May 09, 2021: Huawei has officially released the second batch of HarmonyOS 2.0 developer public beta.

May 09, 2021: Huawei has plans to adopt other processor platforms including Qualcomm and MediaTek besides the in-house Kirin chipset.

May 07, 2021: Huawei Technologies Co., Ltd. recently applied for the registration of “HarmonyOS Connect” and “Hongmeng Zhilian” trademarks, and a new application for the classification of transportation vehicles.

May 07, 2021: Once the eligible smartphone users got their hands-on to experience the HarmnyOS 2.0 beta version many of them found that that apps are consuming less power and memory as compared to Android-based EMUI 11. Here’s the full detail.

May 05, 2021: Huawei HarmonyOS 2.0 boot interface has finally removed the original word Powered by Android at the bottom.

May 04, 2021: Huawei has officially opened a Weibo account of Huawei HarmonyOS (@HuaweiHarmonyOS).

April 29, 2021: Check the latest video of a phone running HarmonyOS.

April 28, 2021: Some Huawei users have now received the HarmonyOS 2.0 developer Beta public test version, seamlessly connecting to EMUI11. The update package sizes are 2.87 GB/6.20GB. It is said that more devices will be upgraded after May 31, 2021.

April 27, 2021: Some popular leakers around the globe shared the screenshot of Huawei’s HarmonyOS running phone screenshot. It shows the quick setting icons and design.

April 25, 2021: Huawei Mate 40 Pro 4G version is cleared TENAA listing and the hardware specs are basically the same as the 5G version. The processor is still Kirin 9000. Due to restrictions, it does not support 5G. The system is replaced with the self-developed HarmonyOS 2.0. It should be Huawei’s first mobile phone with HarmonyOS pre-installed.

Received the latest EMUI update on your smartphone? Send us an email (firmware@huaweiupdate.com) with Screenshots/Updates/Versions/Changelogs.