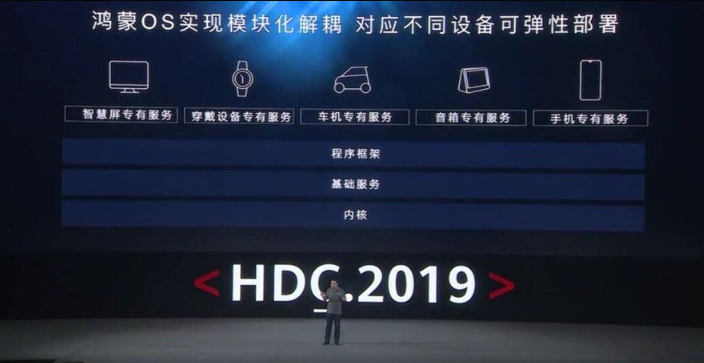 
The first developer conference of Huawei’s consumer business was held today. Huawei first announced the self-developed operating system “Hongmeng“. Yu Chengdong said that in the next 5-10 years, Huawei’s long-term strategy for consumer business is a full-scenario smart life strategy. And once again mentioned the “1+8+N” strategy of Huawei’s consumer business: 1 is the mobile phone is the main entrance, 8 is the entrance of 4 large screens: PC, tablet, smart big screen, car screen, not now released There are headphones, speakers, watches, glasses. N is the Huawei HiLink ecosystem consisting of pan-IoT hardware.

One of the 1+8s is Huawei’s own work, and this N welcomes more partners to join, eventually forming a more open form.

First, the distributed architecture is used for the first time in the terminal OS to achieve a seamless collaborative experience across terminals. Hongmeng OS’s “distributed OS architecture” and “distributed soft bus technology” through the public communication platform, distributed data management, distributed capability scheduling and virtual peripherals four capabilities, the corresponding distributed application of the underlying technology to achieve the difficulty Application developer shielding enables developers to focus on their own business logic, develop cross-terminal distributed applications like the same terminal, and enable end consumers to enjoy a powerful cross-terminal business collaboration capability for seamless use of various scenarios.

Second, determine the delay engine and high-performance IPC technology to achieve smooth system. Hongmeng OS solves the problem of insufficient performance of existing systems by using two techniques: determining the delay engine and high-performance IPC. It is determined that the delay engine can allocate the task execution priority and time limit in the system before the task is executed, and the task resources with higher priority will be preferentially guaranteed to be scheduled, and the application response delay is reduced by 25.7%. The compact nature of the Hongmeng microkernel enables IPC (interprocess communication) performance to be greatly improved, and the process communication efficiency is increased by 5 times compared with the existing system.

Third, re-engineer terminal device trusted security based on microkernel architecture. Hongmeng OS adopts a new micro-core design with stronger security features and low latency. The basic idea of ​​microkernel design is to simplify kernel functions, implement user services as much as possible outside the kernel, and add security protection to each other. The microkernel only provides the most basic services, such as multi-process scheduling and multi-process communication.

According to reports, Huawei will take the lead in using the Hongmeng OS 1.0 in the smart screen products launched this year. In the next three years, in addition to improving related technologies, Hongmeng OS will gradually be applied to more smart devices such as wearables, smart screens and car machines.